Tombstones and Disc Donk are two great Atari games in one binary!

Use the Select switch (F1 in Stella) to choose between Normal Tombstones (you can touch the tombstones), Electric Tombstones (touching them will kill you; this is the default), and Disc Donk.  The left difficulty switch changes the difficulty in Tombstones.

It’s been a long war.

You are one of the last five members of the Blue Brigade.  You are fighting for everything you believe is right, just, free, and true.

Your enemies for the past ten years have been the treacherous Yellowcoats.  They too are fighting for everything they believe is right, just, free, and true.

In the past year, your scientists have made advances in ballistics and issued each remaining member of the Brigade a gun.  “Even a chicken could shoot a Yellowcoat,” the boys the in the lab say.

But the Yellowcoats operate on stealth.  There are far more of them than there are of you, and they can appear from seemingly out of nowhere.  They are superior in hand-to-hand combat, and if you come into contact with one, you are guaranteed a swift death.

The Yellowcoats have a strange tradition of mourning their dead.  Anytime one of them falls in battle, other Yellowcoats immediately erect a tombstone.  The inscriptions are tedious and never enlightening.  All the graves and their markers do is get in the way of your bullets—and you.

If you defeat enough Yellowcoats, you will win the battle—but not, as of yet, the war.  You will then be deployed at the next battlefield, where intel assures you that you will face an even larger and faster army of Yellowcoats.

One other thing.  You might have a gun.  But the Yellowcoats have bombs.  As of this moment, the science is simplistic and the bombs are difficult to set up.  But as you fight increasing battles, you feel both the technology and the skill of the Yellowcoats deploying it are increasing.

Should a Yellowcoat detonate a bomb, all will be destroyed:  the Yellowcoat, the tombstones, the battlefield and you with it.  Informally, the Yellowcoats call themselves the Omelets.  They’re not worried about breaking a few eggs.

Member of the Blue Brigade, you are determined to end this long war.

I grew up with a TI-99/4a, and one of my favorite games was TI Invaders. My favorite part of that game was the bonus round where you shot a spaceship back and forth that got increasingly smaller and further away. So here, in that grand tradition, I am happy to present you this Tombstones B-side which is stupidly named Disc Donk (after the sound made when the ship gets hit).

Disc Donk attempts to replicate as much of the TI Invaders bonus game as possible while tacking on enough extras to make it a full game.

Requires Stella or another Atari 2600 emulator to play. 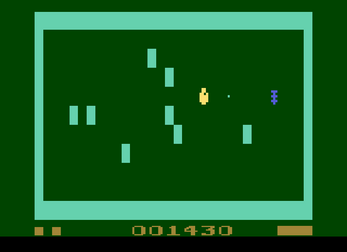 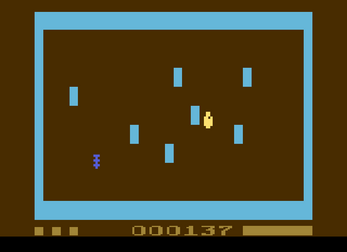 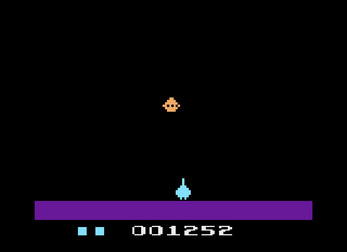 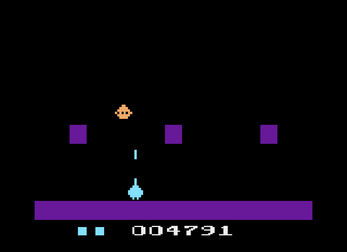